(Thanks to De Groene Vinger, the news about this project has reached the United Kingdom. That’s why we wrote this English-language summary.) In the village of Oosterbeek in The Netherlands on april 2nd 2015 an experiment was initiated using pigs (the rare breed ‘bonte bentheimer’) to fight japanese knotweed.

Japanese knotweed is a very invasive plant. The Dutch authoroties started a experimental program to find our which manner is the best to fight it: regular mowing (ten years?), using chemicals, moving top soil, covering with black foil and other means.
Using animals is not part of it. Probably no-one thought of it.
Hence, this experiment with pigs, is not part of the official program, but may be considerd as an interesting addtion. The Organic Way.

In the United Kingdom the problems with japanese knotweed are even bigger than in The Netherlands. Read e.g. this article in The Guardian.

It started somewhere in late 2014, when the alderman Wendy Ruwhof of the community of Renkum, to which Oosterbeek belongs, visited the gardens of MergenMetz. How it came up, is still unclear, but at a sudden moment Wendy and Norbert were talking about using pigs to fight japanese knotweed. 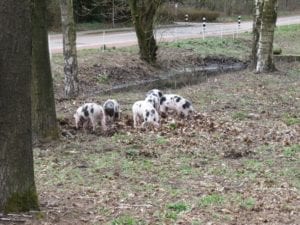 MergenMetz breeds the rare pig bonte bentheimer, of which approximately 2,000 exists in The Netherlands and Germany.

On the site where the pigs live, japanese knotweed had gone, whiped out, eradicated. The pigs ate the leaves as well as the roots. Pigs dig deep (50 cm up to 1 meter), when they want.

Towards the end of 2014 plans were made with André Menting (responsible for the nature and landscaping in the community) and agrarian artist Sjef Meijman. Norbert Mergen of MergenMetz and Sjef Meijman knew eachother, they both were in the board of the association ‘Het Nederlandse Bonte Bentheimer Landvarken’.

In the past couple of years Sjef and a collegue artist carried out a project called Het Varkenshuis (The Pig House). Bonte bentheimers were placed in the urban area of local communities (e.g. the city of Rotterdam) and fed by the people who lived around the lot. Sjef had the necesary experience in how pigs and people behave when they live together in the same road and which measurements had to be taken. (Little to nothing.)

On the 2nd of March 2015 the civilians living near the test site were informed.
In his presentation Sjef incorporated fragments of TV reports that were made about The Pig House and everyone was immediately enthousiastic.

Almost everyone volunteered as Assistant Farmer. (They keep an eye on the animals and feed them.)

It is an experiment, so it is to learn. And what we learned up until know is:

26 Seconds of footage that show they eat